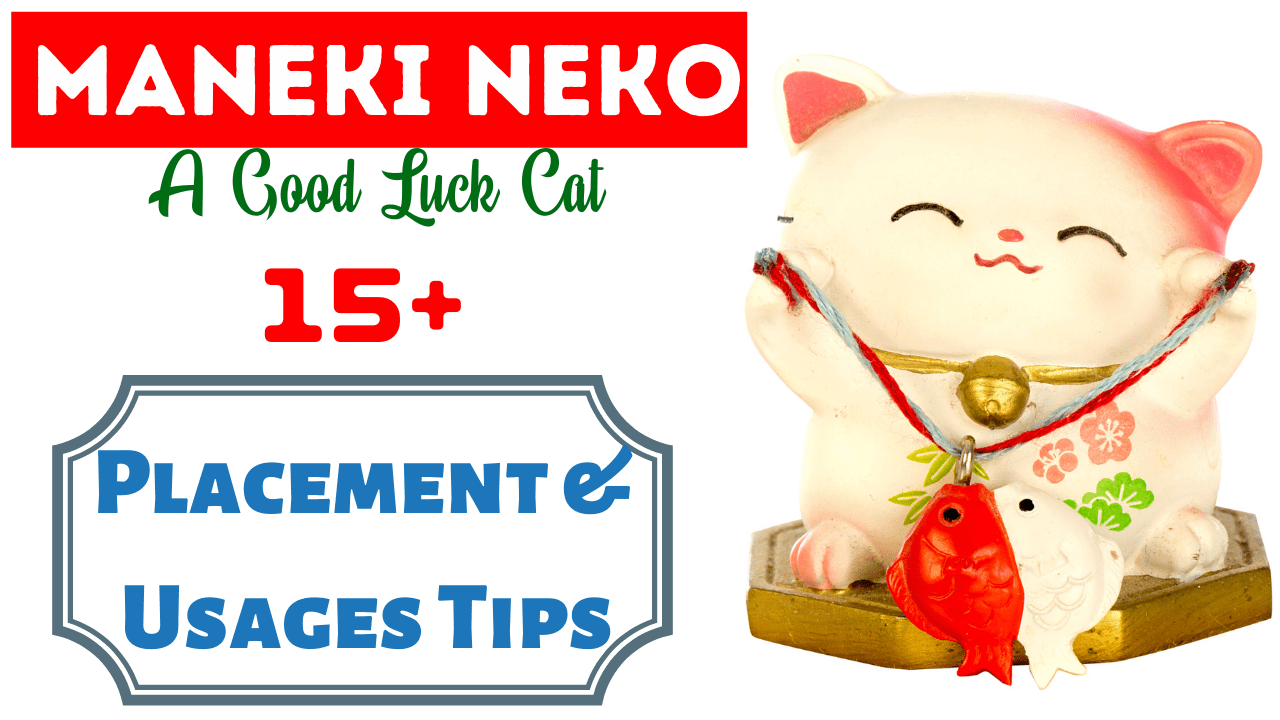 Maneki Neko Cat is a commonly use Japanese good luck cat. It is believed to bring good luck to its owner; therefore, it is also known as the “beckoning cat.”

We will discuss its importance and effectiveness along with some essential facts related to it.

#1. What Does The Chinese Waving Cat Mean

These Japanese cat statues are usually in the form of small figurines made from plastics or ceramics. They are small arm-waving cats.

And you must have come across them in various shops, restaurants, malls, general stores, etc. Most Maneki is now availavle with a automatic arm moving back and forth , which seems to welcome guests and people.

These fortune cats are available in different shapes, styles, and colors. Some of the most popular colors are white, gold, and black.

In Indian culture, the black cat symbol is seen as a bad omen, but Japanese people associate it with a black cat’s good luck charm. It’s a Japanese symbol for fortune. Now that we know its appearance and presence throughout the world.

The term “Maneki-Neko” was originated from Tokyo in 1852. Several similarities have been noted between Good Luck Chinese Waving Cat arm movement and a cat washing its face.

It is an ancient Japanese belief that a cat washing its face indicated the arrival of a guest, which is why they are used at places where people need to draw in more customers.

Due to this particular reason, Cat statues are found in modern castles dated back to 300-500 AD.

Even though this lucky cat’s exact origin is unsure, there are many stories regarding its birth, one of the most popular ones is that of Gotuko temple.

People are claiming that in the early 17th century, a monk used to live in a small temple of Tokyo. Even though he was destitute, he used to live with a cat sharing his food with her.

One day the Lord of Hikone district Lord Nakaota was on his way to hunting, right when he was passing through the old monk’s town.

He was forced to take shelter under a tree due to a massive storm. While he was under the tree, he noticed a cat raising one of her paws above his ear as she welcomed him in the temple.

Soon enough, the Lord left the tree’s shelter and went to the temple to take a closer look at the cat. Just as he reached the temple, a huge bolt of lightning struck the tree and destroyed it.

Lord Nakaota was so relieved and grateful that he spent the rest of his life serving as a patron at the temple.

And he donated enough funds to rebuild the temple. This same temple was later renamed as the Gotuko temple in 1697.

#3. What Does Maneki Neko Cat Meaning?

As mentioned before, Maneki Neko figurine is supposed to draw guests and bring happiness.

This welcome cat is made up of different materials and colors as well as it has different postures, so each lucky cat’s meaning differs accordingly.

Below are my top picks for you, on lucky cat gifts. 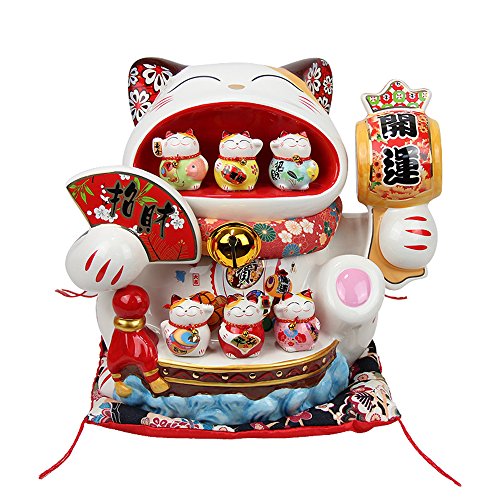 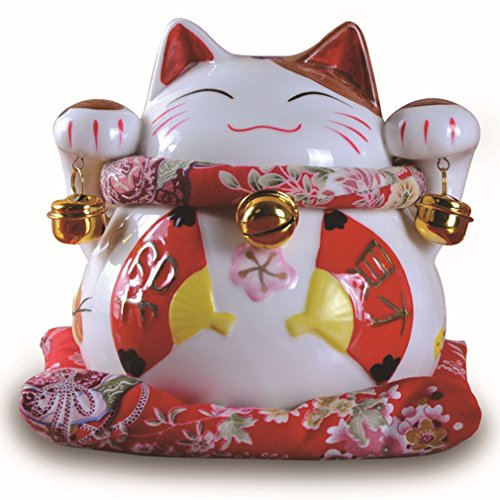 Are you finding this post useful, inspiring? Save THIS PIN to your “Good Luck Cat” board on Pinterest. Do follow me at FengShuiTricks Pinterest for more such exiting Feng Shui Pins, Board, and Videos.

#6. Is Maneki Neko Chinese Or Japanese?

ManekiNeko cats are worshipped as a symbol of good luck in Japan as well as China. This cat initially originated in Japanese culture as a lucky charm.

But the exact origin of how it became a cultural symbol all across the world remains a mystery. One possible explanation was when Japanese people traveled the world, they took these Japanese good luck cats with them.

And soon enough, they became popular throughout the world, especially in China. 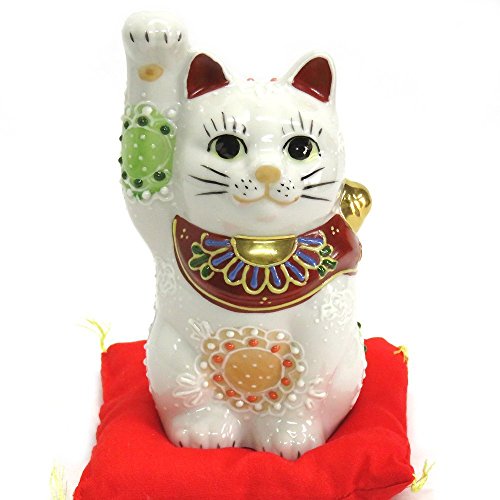 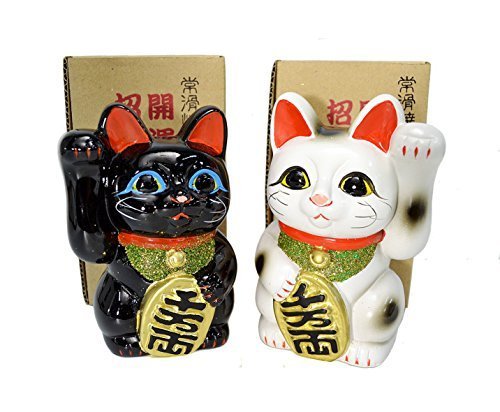 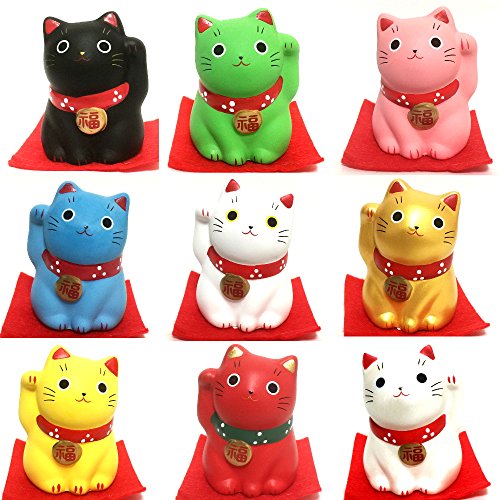 When Japan and China began to exchange their culture, they were reminded of their long-forgotten goddess and accepted Maneki Nenko in their culture.

The answer to the question is obvious: Maneki Nenko originated in Japan, but its resemblance exists in Chinese culture as well.

The word “beckoning” translates to “welcome” or invite someone. Since the back and forth movement of the waving cat depicts welcoming.

“Beckoning cat” is another name for it. Also, when the cat was introduced in western culture, this name caught up very fast.

The name of lucky Cat comes from its posture as it always has its one paw up. Nowadays, this arm moves mechanically in a back and forth motion depicting a welcoming gesture.

This cat is also considered very lucky in Feng Shui culture and commonly used for business purposes. They are used at retail stores, offices, restaurants, and sometimes even in the home.

It can bring wonders to your life. Celebrity chef Gordon Ramsey is so influenced by Maneki Neko Cat that he had launched Lucky cat named restaurant.

The market of cat is more significant than ever. It is widely sold across all major collectibles stores and gift shops.

The market for the cat is more significant than ever. It is widely sold across all major collectibles stores and gift shops.

Hence, you can buy a lucky cat for sale anywhere in the world. Even if you can’t seem to find a store to buy it for yourself, you can always order one online.

Below are the product links, from where you can bring home good luck and prosperity. Apart from this its the best gifting option for any occasion.

Wondering, how do we decide which cat to pick for yourselves? Well, there are several things to be considered before choosing a Cat. Let’s check them one by one.

As discussed earlier, both Maneki Neko and Chinese cats are available in different colors. Therefore, it is vital to choose the one that suits your need.

The significance of different colors is mentioned above; you can use that for reference.

Fortune cats are often holding some items in either one or both paws. Here are some of the common elements and their significance.

A significant percentage of fortune cats available in the market are made up of plastic.

But the ancient tradition indicates that they are supposed to be made out of gold, crystal glass, ceramic, or jade. Even Chinese cat gifts you will receive would mostly be made out of plastic.

Now that you are familiar with all the things needed to be considered while buying the perfect fortune cat, make the best choice according to your individual preference.

There are several Japanese sayings engraved on Cat that is supposed to bring good luck to their users. Some of the most common phrases used are as follows.

Good luck cat tattoo is exceptionally customizable. Since even a little detail can mean so much; therefore, it is widely used by cat lovers and tattoo enthusiasts throughout the world.

Various things that affect the meaning of your tattoo are-

If the cat’s eyes are closed, it will show that the cat will bring good luck very soon.

A cat with both eyes opened represents longevity, but beware your luck may arrive late.Along with these two, colors are also considered while choosing the tattoo.

Therefore, it is safe to say that it’s a very sophisticated tattoo that shows your desires and has a profound meaning.

Right paw up means good luck and money. The left paw up is to attract customers. If you wish to have both, you can go for maneki neko both paws raised.

#14. Which Way Should The Good Luck Cat Face?

While placing the cat, you should remember the principles of Feng Shui. Place it in the southwest direction in your office (preferably on an office desk) and the living room.

This way, it will bring luck to your personal life and growth and prosperity to your professional life.

#15. Chinese Lucky Cat Where To Place In Home?

If you plan on using the chinese luck money cat in your home, then place it in the Southeast direction as it is the wealth direction of the house.

In the philosophy of Feng Shui, it advisable to throw away all the broken items whether it’s a Feng Shui item or any other stuff. As they carry huge negativity and it’s best to keep them away from you.

Ever since the start of humanity, people believe in good luck charms, and good luck cats are one of the.

Its legends date back to 18th century medieval Japan. Also, it has a huge fan base in China due to its similarities to their goddess Li Shou. But in modern times, china doll cats gaining popularity throughout the world.

Using a proper Cat figurine can work wonders for your business as well as personal life.

But we should always remember, they are do not guarantee any success. 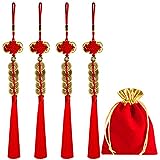 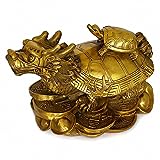 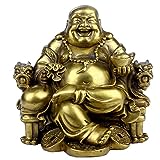 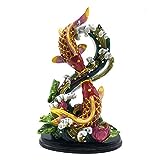 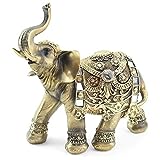